True patriotism is based on objective knowledge

27.10.2021 admin Без рубрики Comments Off on True patriotism is based on objective knowledge 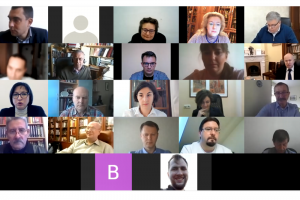 Everyday life during occupation, oral testimony and previously taboo stories from the history of the Great Patriotic War were in the center of attention of the participants of the Russian-Belarusian round table “Unknown pages of the history of the Nazi occupation of the regions of the RSFSR and the BSSR”, which took place on October 21, 2021 and brought together researchers from various scientific, archival, educational institutions of the two countries. The organizer was St. Petersburg Institute of History of the Russian Academy of Sciences with the participation of Minsk State Linguistic University.

In three sections on the basis of historical sources the following sublects were discussed: the beginning of the occupation period, its ideological and economic basis, the organization of partisan resistance and reconnaissance and sabotage operations, the Holocaust and murders of residents in the occupied territories, the situation of prisoners of war and civilians in various areas, museum activities during the war, the fate of cultural heritage ​​and its keepers in war and post-war times.

25.10.2021 admin Без рубрики Comments Off on “Autograph of History” – anonymous complaint from Peru against the Grand Inquisitor of Spain

A document from the collection of letters from the papal nunciature in Spain of the years 1670-1675, kept in the Archive of St. Petersburg Institute of History of the Russian Academy of Sciences, can tell about an amusing episode in Spanish and Latin American history. In the program “Autograph of History”, Ph.D., researcher of the Department of General History Pavel Valentinovich Krylov, about a letter that fell into the very center of the interweaving of interests very far from the Peruvian shores and the Andean mountain ranges.

The 10th Scientific Readings in commemoration of O.A. Dobiash-Rozhdestvenskaya

19.10.2021 admin Без рубрики Comments Off on The 10th Scientific Readings in commemoration of O.A. Dobiash-Rozhdestvenskaya

08.10.2021 admin Без рубрики Comments Off on “Autograph of History” – a ship’s certificate signed by the author of the US Constitution

James Madison, the 4th President of the United States, ship’s certificate and legalized piracy in the Mediterranean region at the beginning of the 19th century in the story of Ph.D. Sergei Aleksandrovich Isaev, Acting Head of the Department of General History of St. Petersburg Institute of History of the Russian Academy of Sciences, on a rare archival document acquired by N.P. Likhachev for his collection in Germany or Austria.

Discussions in the House of N.P. Likhachev

05.10.2021 admin Без рубрики Comments Off on Discussions in the House of N.P. Likhachev

Discussion of the new book by Cand. Sc. in History P.V. Krylov “Ne hodi tuda!” Taina gibeli gruppy Dyatlova i ugro-finskaya magiya” [“Don’t go there!” The mystery of the death of the Dyatlov group and the Finno-Ugric magic”], issued by the publishing house “Inkeri”(St. Petersburg, 2021), will take place within the framework of the popular science program of Saint Petersburg Institute of History of the Russian Academy of Sciences “Discussions in the House of NP Likhachev”. The discussion will be held online on October 7, 2021 at 4 p.m.